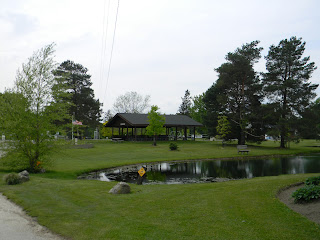 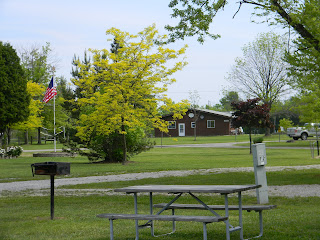 Not long after leaving Charleston, WV we crossed over the Ohio river into Ohio. We are staying the week in the Canton/Akron area of Ohio at a campground called Pier-Lon in Medina, OH. It is a beautiful campground that is kept up. There are quite a few people who just live here. They have breakfast every Sunday morning along with church in their pavilion. I saw some people fishing in the lake and they were catching bass. They do not allow any alcohol in the park, but we took that to mean outside the trailer. I saw a couple of bunnies running around. Boy does Buddy love to try and chase them. I don't know what he would do if he ever caught one. It would probably scare the daylights out of him but he tries. He loves to go on long walks around in the wet grass. 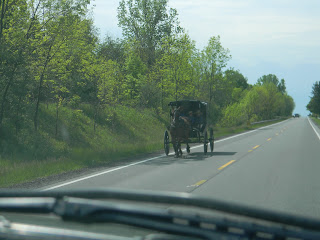 We took our normal Sunday drive this week. We stopped by this gas station to fill up the tank and they were a country store also, so we grabbed a sandwich. We went to drive the Amish Country Scenic Byway that goes through Millersburg, Berlin and Wilmot. Very beautiful countryside. There were a few Amish out in their buggies and walking the country road. There are a lot of cheese factories there. 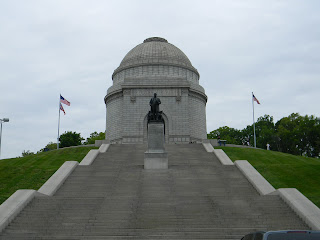 We continued our drive from the Amish country into Canton and Akron Ohio. It began to rain which always place havoc on my pictures. We drove out to William McKinley Presidential Library and Museum. I didn't know it was here so I didn't make plans to see it. The first one we didn't go into. We also went to see the Football Hall of Fame, the First Ladies Historical Site, and the Soap Box Derby 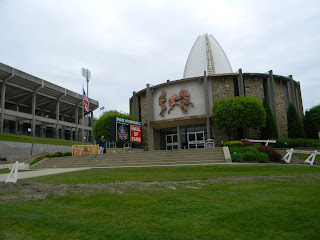 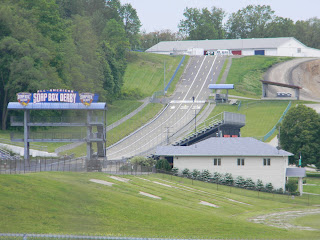 We left Medina a day early and headed to Sandusky, OH to Campers Village at Cedar Point Amusement Park. We planned on staying for 9 days, but got some news from home that is making us have to head back home for a while to take care of some business, so we pack up and started down the road. 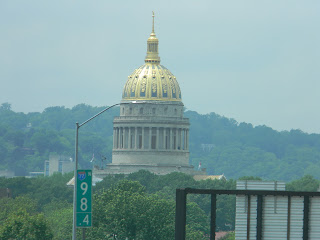 We left Mt. Airy, NC and headed north to Charleston, WV for the remainder of the week. We actually stayed in Milton, WV about 30 west of Charleston at the KOA. Very pretty KOA with large sites.

One of the things I noticed about traveling is that every Walmart has memorabilia from the local colleges. Well this one was no exception. Turns out that Marshall University is just west of here. You may remember this if you watched the movie, We Are Marshall. It was a true story about a college that lost their varsity football team, staff, and other people when their chartered plane crashed on approach to the airport. We didn't go to see it, but its interesting how things jog your memory.

Anyways, we stayed here until Saturday, as usual. Went to a really good Japanese steak house, saw a movie and went roaming their mall.

We went to Mt. Airy, NC last Saturday and stayed at the Mayberry campground. Mt. Airy is the hometown of Andy Griffith and the it is said to be the inspiration to Mayberry. It is also home to the Siamese twins Eng & Chang Bunker.

The town of Mt. Airy really is a neat town, especially if you know about the Mayberry connection. They use squad cars for tours. They have stores like Floyd's Barber Shop, Opies Candy Store, Wally's Filling Station, Mayberry Soda Fountain, Mayberry Courthouse, the Old City Jail, Bluebird Diner, and the Snappy Lunch. 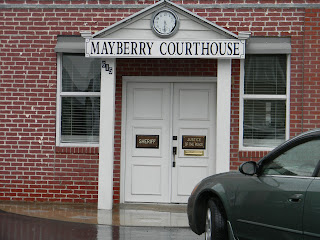 Andy Griffith was born here and they say that he used the town of Mt. Airy as the inspiration for Mayberry in his 2 shows; The Andy Griffith Show and Mayberry R.F.D. It is even near Pilot Mountain (Mt. Pilot). The have a playhouse and museum named after him and the TV Land Statue stands in front of it.


Mayberry Campground is owned by the great great grandson of one of the famous Siamese twins Eng & Chang Bunker. The owner of the campground is Eng's great great grandson. Two guys attached for life, married two sisters and had 21 children together, quite a feat. The Bunker farm was a 2000 acre tobacco plantation. At first they all lived together and slept in a bed for 4, but eventually the wives had didn't get along so they had to set up separate houses.

We only stayed for one night and then headed to Charleston, WV on Sunday. 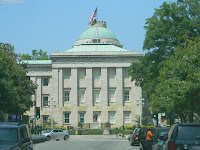 Well folks, I am a little behind on my blog updates. Last week (April 30-May 4) we were in the Raleigh Durham area. We got to see one of Delbert's friends from work and had dinner with him and his girlfriend at the Pit, a really good BBQ place. We also took in the sites of the Raleigh area including the capitol and Duke University and of course a trip to Durham isn't complete without going to see a Bulls game: they won... We had great seats, 3rd row behind home plate, but the pictures stink because of the netting. We had a great time. We stayed in a place that was nice and had huge spots. In no way was it a resort or anything like that, just lots of trees, large lots, great wi-fi and cable. There sure seemed to be a lot of universities in the area though. The campground was actually in the Chapel Hill area about 15 miles or so from Raleigh. We had a great time.

Check out my blog for the next place... we are heading to Mayberry... ok Mt Airy, which is the home to Andy Griffith. 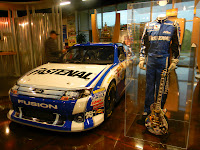 Woo Hoo... got to go see Roush Fenway Racing facility..... nienor nienor nienor.... I am like a kid in a candy store. My favorite driver is Carl Edwards and getting to see his cars and stuff is so cool... I can actually touch them. I don't know how any race car driver actually fits in the seat though. They are really narrow and if you watch a race, they just seem to hop in and out of those things like it is nothing... although, I haven't seen any heavier people racing. 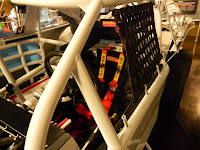 Roush Fenway Racing's Sprint Cup drivers currently are Carl Edwards, Greg Biffle and Matt Kenseth. Ricky Stenhouse, Jr and Trevor Bayne are Nationwide drivers. There are so many things to see here from all of the Roush drivers but I especially liked seeing the Carl stuff. After checking out the museum and gift shop we went over to their garage and saw them working on the cars.

We also went to Petty Motorsports, which didn't have anything to see and we to Earnhardt Ganassi Racing, which had a few more things.

Its pouring down rain and we headed to the Nascar Hall of Fame. Charlotte is home to all of the racing franchises as well as the Hall of Fame. What a cool place to see the history of the sport. Such an interesting site to see the older cars compared to the newer ones.


They have all kinds of memorabilia and trophies and such from various drivers along with a few simulators. You can check out what a car hauler looks like inside, drive a car in the simulator, practice your pit speed or go head to head in a pit challenge.

It is a really neat place for racing fans, but it is really hard to describe. When you go there, you just go.... wow...

Can't wait to go and check out Roush Fenway's building... Maybe Carl will be there... LOL

Nancy's Life
My husband, Delbert and I have decided to run away from home and become a full-time rv'er. We tried it out for a summer in 2010 and absolutely loved it. Sold our 27' travel trailer and bought a 35' travel trailer with a slide... Boy does that slide make a difference. We left our home on July 1, 2011 and have been on the road ever since. UPDATE: My husband was hit with colon cancer in 2012 and we were back in an apartment until July 2013. We also decided to trade in the 35' travel trailer for a 38' fifth wheel with 4 slides. LOVE IT. We are now back on the road.... 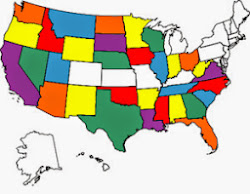